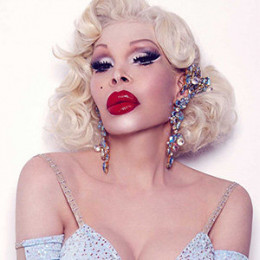 American model as well as a socialite, singer and performance artist, Amanda Lepore is a daughter of the Italian-American chemical engineer and a German-American housewife who has schizophrenia and spent much time in mental institutions. Lepore has appeared in many fashion magazines, such as French Playboy, Ponytail, DAMn and TUSH. She has a cameo in the 1998 documentary 'Party Monster: The Shockumentary' as well as the 2003 film 'Party Monster'.

In 2014, Amanda Lepore was featured on drag performer Sharon Needles' single "I Wish I Were Amanda Lepore". When My Sorrow Died: The Legend of Armen Ra & the Theremin (2014), Out in Manhattan (2008) and Out on the Edge (2004) are her popular movies. Amanda has a line of cosmetics in partnership with CAMP Cosmetics called "Collection Lepore", as well as a signature perfume.