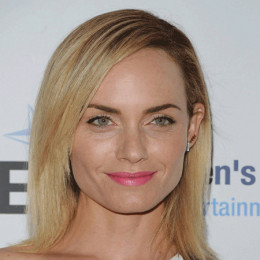 Amber Valletta is an American supermodel. She also appears on big screen films, fashion magazines and soaps at times. Her journey as a supermodel began from 1990 and since then she never looked back and continuously progressed further. She has already been face of popular brands like Giorgio Armani, Chanel, Louis Vuitton, Prada, Gucci, Versace and Valentino. In 2000, she made debut in film industry and since then she has established herself as a talented actor.

Amber has attained remarkable milestone of being face of American Vogue for sixteen times. She is also active with Oceana's Seafood Contamination Campaign. She is serving as a Spokesperson for the campaign. She was also the one to endorse Democrat President Barack Obama for re-election in 2012. She is divorced and had some affairs previously. However, she appears single right now so far reports are considered and she is mother to a son.

Amber married volleyball player Christian McCaw in 2003. They commenced dating in 2000. However, after more than a decade, they decided to end their marriage and divorced in 2015. They have a son together.

Auden McCaw is son to Amber Valletta and Christian McCaw. However, they are divorced and no longer share romantic relationship.