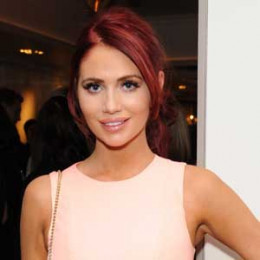 Amy Childs is an actress, model, TV personality, business women plus a mother. She earned fame from the TV series, The Only Way IS Essex. Amy is one of the established and independent women of today. She is in a relationship with her long-time boyfriend, Bradley Wright. They are having an on-off relation and despite that, they had a baby girl named, Polly.

Born to father, Billy Childs, and mother, Julie Childs as Amy Andrea Childs was born on 7th June 1990  in London. She was raised with her older brother, Billy. The Childs family were animal lovers, so they had three pugs. When Amy was six years old, she along with her family shifted to Brentwood, Essex. When she was still a child, she had dyslexia.

Childs started her career from 2010 with her first television series The Only Way Is Essex. After that, she did a reality show named, Big Brother(UK) with the fourth position and in 2011, she started her own reality show titled, It's All About Amy. In 2012 she also participated in an episode of Let's Dance for Sports Relief with her cousin, TOWIE star, Harry Derbidge.

Amy Childs does not limit herself to acting only. She also was successful in business sector too. Childs launched her own fragrance in 2012. She also started various beauty related training as well and also launched a range of eyelashes too.

Amy was in two unsuccessful relations. Firstly, she was in a relationship with Kirk Norcross, an English reality television personality. They were together for a short period, and they broke up initially.

She then dated David Peter after she broke up with Kirk Norcross. David Peter is known for the game show, Take Me Outa, he was one of the contestants of the show. Later on, they got separated in May 2013.

Amy Child is recently in an on-off relationship with Bradley Wright. He is a builder with a criminal record after spending two stints in jail in accusation of stealing goods.

They firstly met in a local pub. The couple has a baby girl named, Polly born on 30th April 2017. She posted many sexy photos even during her pregnancy period. She posted many photos on social networking sites with her baby too.

Childs has an estimated net worth of Euro 5 million. She has her own boutique and recently wrote a book named, Amy Child worth 100 per cent. Amy has her own business and the shows too. She might be earning much from those sources. She owns Range Rover worth Euro 180,000.

Polly Childs-Wright was born on 30th April 2017. Polly is the daughter of Amy Childs and boyfriend Bradley Wright.