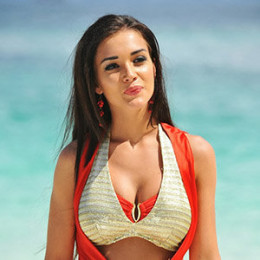 British model and actress, Amy Jackson is the daughter of Marguerita Jackson and BBC Radio Merseyside presenter, Alan Jackson. She attended St Edward's College. Jackson was signed to play the lead role in Shankar's upcoming film "2.0" alongside Rajinikanth and Akshay Kumar. She made her debut in Telugu cinema with the Vamsi Paidipally film "Yevadu" alongside Ram Charan and Shruti Haasan, playing the role of Shruti.

Amy Jackson dated Bollywood actor, Prateik Babbar in 2012 and broke up in 2012. She then dated British boxer Jo Selkirk in 2013, who was accused of assaulting Amy in Liverpool, England in December 2013. She has also dated Ryan Thomas, a 'Coronation Street' actor. The couple ended their relationship after being together for only six months in 2014. There is a rumor that Jackson dated Salman Khan, an Indian actor.