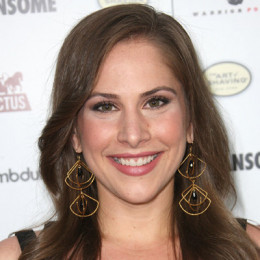 Ana Kasparian is a young and inspiring Co-host, producer, political adviser, online radio talk host, and entertainment correspondent. She is one of the emerging talents in the media industry in the country with her vast educational background.

Ana Kasparian is happily married to her longtime boyfriend, Christian Lopez who is a minor league baseball player. The two tied a knot in 2015 in a lavish ceremony attended by close friends and family members.

After being eloped, they had public wedding in September of 2016 officiated by the fellow co-host of TYT, Cent Uygur. The tv show host and the athlete partner have been united as life partners for five years now.

Regardless of being together for years, the lovebirds aren't yet heard of having divorce nor have any children. Her relationship with Lopez has grown stronger than they ever had. They own a pet, retriever.

The 33-year-old recently shared a ball dance video with her beau through Instagram. They were enjoying a party on March 2, 2020. For Ana, there is no one else she'd rather dance throughout life with.

How Much Is Ana Kasparian's Net Worth?

Ana Kasparian has an estimated net worth of $2 million earns more than $80,000 from her profession. She pockets over the salary of $99,016 per year from TYT Network.

Ana Kasparian started her career as an assistant producer for ‘CBS Radio.' She got her first breakthrough in The Young Turks Show in 2007. Soon after that, she worked for On Point, AOL News, YouTube, and TidalTv.

Ana Kasparian aka Anahit Misak Kasparian was born on July 7, 1986, in Northridge, Los Angeles, California, USA. She is a daughter of Armenian immigrant parents.

The news anchor grew up speaking Armenian as her first language and joined kindergarten without being able to utter English. Watching Sesame Street helped her learn English quickly. She did ballet from age 3 to 19 and performed it professionally throughout the years.

Ana Kasparian is living a blissful married life with Christian Lopez since 2015 till today, They have been together for five years now.