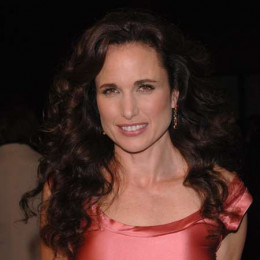 An American actress and fashion model who is famous as weatherman Bill Murray's love interest in Groundhog Day. She is daughter to Pauline "Paula" Johnston and Marion St. Pierre MacDowell.She attended Winthrop University. In 1978 while she was in trip to Los Angeles she was spotted by modelling agent and was later signed with Elite Model Management in New York City. She modeled fro Vogue magazine and also appeared in ad campaign of Mink International, Anne Klein, Yves Saint Laurent, Vassarette, Armani perfume, Sabeth-Row and Bill Blass. She debuted in film industry by starring in 1984's Greystoke: The Legend of Tarzan. She has starred in popular movies like Four Weddings and a Funeral, Groundhog Day, Green Card and so on. She has also starred on Hallmark Channel family series Cedar Cove.

Regarding her personal life, it has not been so much pleasant and successful as her career. She was married twice and both of her relationship ended in divorce. She has got a list of boyfriends and partners. Since she is so famous and attractive lady with her successful career it is no wonder she had so many lovers. She is currently in a relationship with her boyfriend who is a businessman.

Professionally he is a former model. They first met each other while posing for Gap ads. Together they were parents of three children. Reason behind their divorce is still unknown.

Businessman Rhett was married with her and they enjoyed marriage relationship for three years. They had no children from their marriage.

he is the eldest son from her first marriage. He has two sisters.

She is very gorgeous. She was entitled as Miss Golden Globe 2012.

She is the youngest daughter. Following her mother's footstep she is an actress too.