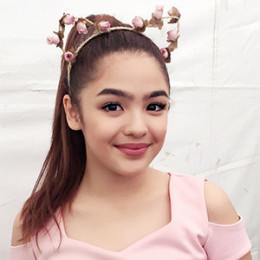 A Filipina child actress, Andrea Brillantes ,is currently single. She is popular from the primetime series named Annaliza in 2013. She is the daughter of Mabel Gorostiza and Byon Gorostiza. She began her career from the comedy show named Goin Bulilit. She has guest appearances in the show in Wansapanataym and other shows from TV5.MomZillas is her first movie, she has a character of Young Rina in this film.

Andrea Brillantes won many awards. She has won Yahoo! Celebrity Awards in the category of Child Star of the Year, she has also won the 27th PMPC Star Awards for TV in the category of Best C hild Performer. Her famous television series are E-boy and Alyna. Brillantes is an agent for Star Magic. Brillantes appeared on movie named E-Boy as Princess,in the character of a boyish girl who believed in fairy tales.