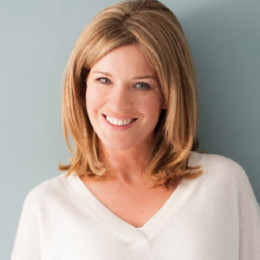 Andrea Catherwood is a Northern Irish TV presenter and journalist known for her work in BBC and Bloomberg Television. Catherwood'is married to Gray Smith and is a mother of two children.

Andrea Catherine Catherwood was born on November 27, 1967. She grew up in her native land Belfast, Nothern Ireland. Her mother Adrienne McGuill was an announcer and news reader at Ulster Television.

Catherine completed her education from Strathearn School. She then enrolled at the University of Manchester and graduated with an honors degree in Law.

In 1990, she joined Ulster Television serving there for three years as a news and features reporter.  Later in 1993, she started working in NBC Asia in Hong Kong.

She then joined ITN in April 1998 as a news caster and senior reporter for ITV News in ITV Morning News providing special reports for News at Ten.

In 2009 Andrea joined Bloomberg Television as an anchor for Briefing, The Pulse, and Last Word. She worked there for three years.

Afterward, she worked as a presenter on various Radio 4 programs. She presented Woman’s Hour on BBC Radio 4 and You and Yours. She is a regular stand-in presenter of the Media Show on Radio 4.

The 50-year-old beauty blonde Catherine is happily married to husband, Gray Smith. They tied the knot on September 28, 2002. Smith is a lawyer by profession.

The duo is blessed with three sons namely Finn Harry Catherwood Smith, Jago, and Ruari. Despite her busy professional life she has managed to provide an adequate amount of time for her family. She is fully committed to her family and has not been in any kind of extra marital affairs till date.

As a skillful journalist, Andrea makes a decent amount from her career. Her current estimated net worth is $1.2 million.

Gray Smith, husband of is the lawyer by profession. The duo tied the knot on September 28, 2002.

Finn Hary Catherwood Smith is the oldest son of Andrea Catherwood and Gary Smith. He was born on 9th February 2004.

Ruari and Jago are twins. They are the second and third child of the couple.