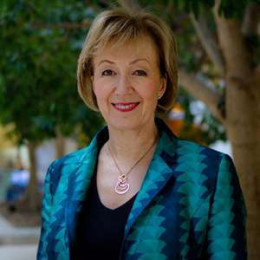 Andrea Leadsom, born in Aylesbury, is a British politician. She was born to father Richard Salmon and mother Judy Salmon. Andrea went to Tonbridge Girls' Grammar School for her high school studies and then graduated from the University of Warwick with a degree in Political Science. She started her career in finance working for Barclays de Zoete Wedd as a debt trader. Andrea worked for South Oxfordshire District Council as a Councilor for four years since 2003.

Andrea Leadsom in known for being actively involved in EU reform act. She was elected to the Parliament in 2010 with a majority of more than 20,000. Leadsom became the Minister of State for Energy in 2015. She had an important role in Brexit referendum where she was on the "Leave" panel and had a great influence upon others. After the Brexit results and the resignation of David Cameroon, Leadsom registered candidacy for leader of Conservative Party. She is married to Ben Leadsom and has three children, two sons, and a daughter.

Ben Leadsom is a firm director managing donations and loans. Andrea has been married to him happily and has three children.

There is not much information about Fred. Only some pictures of him can be found.

Harry is the second son of Andrea who is good looking and smart. There is not much information about him.

Charlotte is a cute looking kid with blonde hair. There is not much information about her except the pictures.