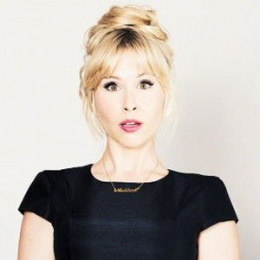 Andree Vermeulen is an American comedian and actress known for performing comedy skits in the Upright Citizens Brigade ( UCB). She is famous for her role, Dr. Monica Scholls in the 2015 series, "Angie Tribeca" where she acted alongside Rashida Jones. She also appeared in series like "NTSF: SD: SUV", "New Girl", and "The Birthday Boys".

Andree Vermeulen was born on November 4 in Los Angeles. She was raised in Catholic family background and enrolled in a local school.

Vermeulen was into comedy acts from an early age and decided to pursue her career in comedy growing up.

Vermeulen is known for appearing in the TBS show named Angie Tribeca in the year 2015. In the show, she portrayed Dr. Monica Scholls and acted alongside Rashida Jones. She has also appeared in series like NTSF: SD: SUV, New Girl, and The Birthday Boys.

In the 2010 comedy movie Laid Off, she was cast for the role of Angela Bolio and acted alongside Michael Ryan, Jennifer Bartels, and C.J Moebius. She was also in the movie Doris and Mary-Anne Are Breaking Out of Prison where she portrayed Doris in 2015.

Besides acting in front of the camera she has also voiced some characters. She has given her voice to the character named Ruffnut in the highly acclaimed animated series How To Train Your Dragon and Dragons: Race to the Edge.

She also performs at the Upright Citizens' Brigade Theatre. She has been doing some comedy videos and featuring in some college humor videos, Funny or die and UCB comedy.

Vermeulen is a part of the first Steve Jobs Internet movies name iSteve which is basically a comedy sarcasm.

Vermeulen has an estimated net worth of $5 million according to the sources which she earned as a stand-up comedian and actor.

Vermeulen is in a relationship with her fellow stand up comedian Andrew Michaan. The couple has been dating since 2016 and worked together at the UBS theatre in Los Angeles. Their anniversary is on April 15 and is often seen going on vacations together.

Look at my beach boys

She has an Instagram named dreeandree which have 7.7k followers as of July 2018.

Vermeulen owns pet dogs named Archie and Crouton also has a cat whom she loves a lot. She has even made their Instagram account by their names which have around 834 followers.