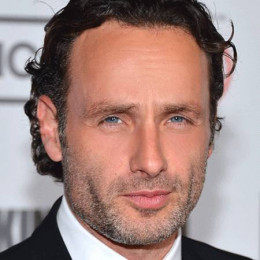 An English actor who is widely known as Rick Grimes which he portrayed on the AMC horror drama series The Walking Dead which was released in 2010. He is son to civil engineer father and a South African nurse mother. When he was just 18 month old his parents moved to Kingston upon Hull. He attended Beechen Cliff School. From young age he had keen interest in acting career and as a result he started career starring as Artful Dodger in a school production of Oliver! when he was just 14 years old. After completing high school, he joined Royal Academy of Dramatic Arts. He debuted from a TV series named "Births and Deaths". He has already acted in several movies like Human Traffic and Gangster No. 1. The drama series The Walking Dead in which he has been working currently has the highest Nielsen ratings in cable history.

Talking about his personal life he is already tied in a knot with his love of life. Together both look very cute couple sharing common happiness and great romance. Their marriage was performed in the presence of their family and friends. American actress, singer, and food writer, Gwyneth Paltrow's daughter Apple Martin was the flower girl at their wedding. The couple is blessed with two beautiful children.

Andrew Lincoln was born on September 14, 1973, in London, England. He is British and belongs to the Caucasian ethnicity.He is the son of an English civil engineer and a South African nurse.

Andrew was just 18 months old when his family moved to Hull and then shifted to Bath, Somerset. He joined Beechen Cliff School and played in the school production, Oliver! as Artful Dodger.

Later, he attends the National Youth Theatre from where he understands his passion towards acting and committed to being an actor. After schooling, he attended Royal Academy of Dramatic Art (RADA) drama school and started to use "Andrew Lincoln" as his stage name.

She is the daughter of Jethro Tull who is professionally a vocalist and Ian Anderson. Together they are parents of one son and a daughter.

He is the eldest child of the family and he resembles more like his father.

She is the only daughter beside one son. Her picture along with family can be found in different sites.