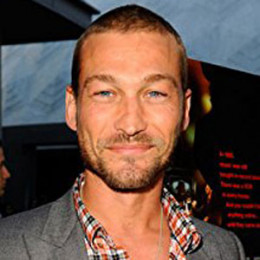 Welsh actor, Andy Whitfield was known for his lead role as Spartacus in the American television series, Spartacus: Blood and Sand. Whitfield had been working as an engineer and building inspector for a consulting agency before pursuing a career in modeling and acting. Whitfield is survived by his wife, Vashti and their two children. He died on 11 September 2011 in Sydney due to non-Hodgkin lymphoma.

Whitfield attended the University of Sheffield in England where he studied Construction and later, he migrated to Australia in 1999 and started working as an associate engineer in Lidcombe. He also joined Ysgol Sir Thomas Jones in Amlwch, Anglesey.

In 2008, Whitfield was cast in Australian family-oriented drama/comedy TV program, The Strip as Charlie Palmer. The same year, he worked in Packed to the Rafters, and McLeod's Daughters.

In 2010, Whitfield starred in the first season of American television series, Spartacus: Blood and Sand. The same year, he was cast in Australian thriller film, The Clinic.

Whitfield had been worked in Television miniseries, Spartacus: Gods of the Arena as a voice artist, before his death on 11 September 2011.

In August 2010, Whitfield collaborated with Freddie Wong and created a 2-minute YouTube video "Time Crisis." The video was based on the video game, Time Crisis. He had also voiced in the prequel mini-series, Spartacus: Gods of the Arena, however, his role remained uncredited.

Andy Whitfield had an estimated net worth of $5 million from his career as an actor, according to the celebrity net worth.

Andy Whitfield married Vashti in 2001. They first met in London and moved to Sydney then tied the knot. They welcomed two children before Whitfield's death.

Whitfield was diagnosed with non-Hodgkin lymphoma in March 2010 and immediately started treatment in New Zealand. Due to his diagnosis of cancer, Spartacus: Vengeance season 2 production was delayed.

In June 2010, he declared to be cancer-free, but three months later during a routine medical check, it was found that it had returned. Whitfield was compelled to abandon his role from Spartacus. Starz replaced him with Australian actor Liam McIntyre.

On 11th September 2011, Whitfield died of non-Hodgkin lymphoma in Sydney, Australia after 18th months of his initial cancer diagnosis.

Here's is the last interview of Andy Whitfield,

Vasthi is known because of her late husband, Andy Whitfield. She has two children with him.