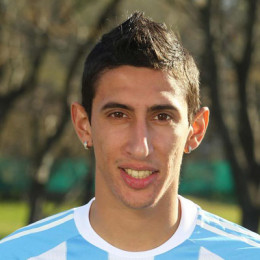 Angel di Maria is an Argentine professional football player who currently plays for the English club side Manchester United and also in the Argentina national football team as a winger or attacking midfielder wearing the jersey number 7. He was born to father Miguel Di María and mother,Diana Hernández de Di María as their only son. He has two sister siblings. He debut in the professional football career from Rosario Central in 2005.

Angel di Maria's Personal Life: Who is his Wife?

He is a married man. He is married to his childhood sweetheart Argentine Jorgelina (née Cardoso) in 2011.

He has an adorable daughter Mia Di María from his wife who was born 3 months premature. He loves his wife and his child. He is very family oriented. He lives with his wife and daughter in England and spending a happy life. His name is often rumored when in the transfers issues of the clubs.

He signed a deal of £59.7 million for Manchester United after winning the UEFA Champions League in 2014. A year later, he joined PSG for around £44 million.

As per the richest, he gathered a net worth of about $22 million while it is about $18 million as per Celebrity net worth.

He won the country gold at the 2008 Olympics and also played at three FIFA World Cups and three Copa America tournaments.

She is his childhood sweetheart and now his wife and the mother of his child. He loves her very much.

She was born 3 months premature and had to undergo with treatment at an intensive care unit at the Hospital Universitario Montepríncipe in Madrid.