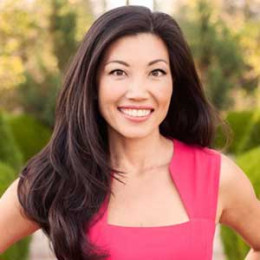 A Chinese American spokesperson, TV personality plus actress, Angela Chee is the first Asian American girl to win Miss California National Teen-Ager. She is the award-winning TV host who worked for KCBS/KCAL-TV and KNBC-TV in LA to Fox 6 and KNSD in San Diego. The Making of 'Titanic,' I Want That! Baths, Blades of Glory are some of the series which are played by the beautiful, Angela. She is also the founder of The Zen Mon, a website that works for the standard upliftment of every mom.

Angela was born in the United States to parents who immigrated from China to the East Coast in the 70's. She was raised in Southern California and belongs to Chinese-American ethnicity. Moreover, she is the first generation of Chinese American who is fluent in Mandarin Chinese.

In 1995, she graduated with the Bachelor of the Arts degree in Communication from the University of California. Later on, she moved to China and attended the Nanjing University for a year and returned to the US where she trained with the Groundings Improv Comedy Group in Los Angeles.

From the very early age of 15, Angela Chee began her career. She became the first Asian American to win the title of Miss California National Teen-Ager from which she gained an opportunity to travel to different places. She started being a motivational speaker and continued to empower and inspire the people.

Also, Chee worked in top TV markets from KCBS/KCAL-TV and KNBC-TV in LA to Fox 6 and KNSD in San Diego. Moreover, she also hosted the shows for the networks including- Home and Garden Television (HGTV), E! Entertainment, Channel One News and so on.

She also helped to launch Entertainment Tonight China for Paramount Pictures and is one of the rare breeds of news anchors who not only appeared on TV but also in the movies as well.

In 1995, she cast in the TV movie, The Making of 'Titanic' by Andy Hill with the cast member- Angella Chi. Furthermore, she also worked in the series including- I Want That! Baths along with Marsh Mokhtari in 2006 and Blades of Glory directed by Josh Gordon and Will Speck in 2007.

Chee is a married woman with two children. The information about her husband is yet not revealed. She might want to keep her family far from the media and limelight. She kept her marriage a secret.

Chee with her husband has two children, a boy, and a girl. The elder baby is a boy who loves playing soccer. Their daughter is 2 years younger than the son.

Chee is a founder of the website named, The Zen Mon which is an inspirational and informative website for all the moms. She established a mission to help the people find their voice and vision to the world. She now works for the empowerment of the women and held a conference to provide information about work-life balance and diversity too.

Angela keeps traveling a lot to different places and also wears branded clothes. Her used shoes were listed in the kick up your heels online auction for $125.00. Well, she is living a lavish life and must probably have a huge net worth to maintain that lifestyle.

Angela Chee is a married woman but has not revealed any information about her husband.The couple together has two children.

The elder child of Angela Chee and her husband is a boy who is two years older than their daughter. He now plays soccer in the school team.

Among the two children of Angela Chee and her spouse, the youngest one is a baby girl. She is 2 years younger than her elder brother.