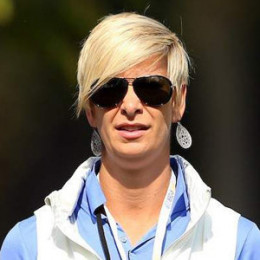 A basketball player and business person, Angie Watson is currently married to professional golfer, plays on the PGA Tour, Bubba Watson .The couple married on 1st September, 2004. She is daughter in law of Molly Marie Watson and Gerry Watson. Angie graduated at University of Georgia. She has played with the Canadian National Olympic team. She is a chief executive at Bubba Watson Inc.

Angie Watson has adopted two children. Her daughter is Dakota Watson and her son is Caleb Watson. The couple adopted the child in 2014. Angie has helped to female players to reach their dream and she joined the Athens-Clarke County Department of Leisure Services. Her husband Watson won second PGA Tour event, the Farmers Insurance Open, finishing one stroke ahead of runner-up Phil Mickelson. There is no information about her affairs in social sites.

Angie Watson was born Angie Ball on June 11, 1977, in Toronto, Canada. She is Canadian and belongs to the White ethnicity. She graduated from the University f Georgia. She was on a women basketball team during her college days.

Soon after her college days, Watson professionally played in Italy where she represented Team Canda at the 2000 Summer Olympics. In 2001, she was signed by the WNBA's Charlotte Sting but after one season her leg injuries ultimately brought her career to an end.

Angie Watson married to professional golfer who plays on the PGA Tour, Bubba Watson. The couple married on 1st September, 2004.

The couple has adopted a daughter Dakota Watson and her son is Caleb Watson. The couple adopted the child in 2014.