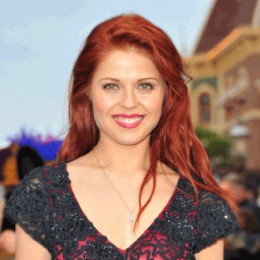 A Russian born American professional ballroom and Latin dancer who has been a regular on ABC's Dancing with the Stars since it's second season. She is daughter to Oleg Trebunski and Irina Trebunskaya. Her parents were professional ballroom dancers and they own their own dance studio. Inspired by her parents she thought to pursue her career in dancing she moved to United States with her parents when she turned 17 years old. She and her partner Pavlo Barsuk reached in 6th place at the International Latin finals which was held in 2007. She has partnered with number of athletes, including Chuck Liddel, Jerry Rice and Sugar Ray Leonard. She and her partner Kurt Warner finished in 5th during the 11th season of popular dance show "Dancing with the Stars".

Exploring her personal life shew as married to her longtime boyfriend and her dance partner too. But sadly after nine years of their marriage, due to some complication in their relationship the couple announced that they had separated and planned to divorce. After divorce she subsequently began a relationship with actor and together the couple is blessed with a beautiful daughter.

He is also a dancer. After 9 years of their marriage relationship the couple got divorced and the reason behind their divorce is still unknown. They had no children from their marriage.

She is very beautiful. Her picture can be found on the social media sites of her parents.