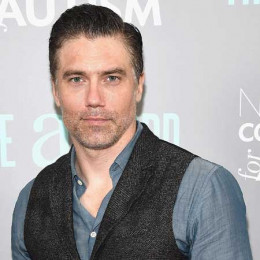 Anson Mount is known for portraying the fictional character of Cullen Bohannon in AMC Western drama series Hell on Wheels. He appeared in the film The Truth about the Tully and also in the episode of the HBO's Sex in the City.

Anson Adams Mount IV is an American actor, who is best known for portraying the fictional character of Collen Bohannon in the AML Western drama series Hell On Wheels. He was born on February 25, 1973, in Arlington Heights, Illinois, US to father Adams Mount II, an editor for Playboy Magazine and mother Nancy Smith, a retired professional golfer,

He was raised along with his half brother, Anson Adams II, and sisters Kristin and Elizebeth, from his father's first marriage.

He attended Dickson Country High School, later he joined the University of the South for master degree in Fine Arts, and then he attended Columbia University for his MFA in Theatre.

Since childhood, Anson was interested in acting and even joined acting classes. He made his acting debut in 1999 by appearing in the Television Series Ally McBea and an episode of HBO's Sex in the City. The series helped him to get the role on NBC drama, Third Watch in 2000.

The same year, he appeared on film Boiler Room along with Giovanni, Ribis, and Ben Affleck. He again played a lead role in the movie The Truth About Tully and also portrayed a driven student filmmaker in the sequel of Urban Legends, Urban Legends: Final Cut.

Later, Mounts received a part in the movie City by the Sea, alongside Robert De Niro, James Franco, Eliza Dushku, William Forsythe and Francis McDormand. Mount played the role so well, that he appeared in the pages of Teen and Seventeen magazines.

Besides, acting he also done several TV shows like Red Widow, The Cure, and Smallville, which helped him gain more popularity among viewers.

He was recently cast as the Marvel Comic Superhero Blackbolt in Inhumans (2017).

Anson Mount personal life has been kept very secret by him. There were rumors about him dating Famle Janssem. However, he never officially confirmed the story.

Mount has done a fantastic job in keeping his life away from the camera. He is possibly single right now.