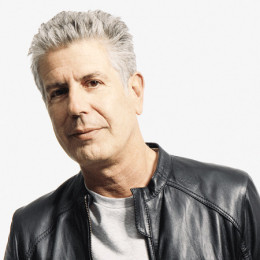 Anthony Michael Bourdain was a chef, television personality and author, widely known for his 2000 book Kitchen Confidential: Adventures in the Culinary Underbelly. He graduated from the Culinary Institute of America in 1978 and served as a veteran of numerous professional kitchens. He was born to Pierre Bourdain, a classical music industry executive for Columbia Records and Gladys Bourdain, a staff editor for The New York Times.

The American heartthrob was born on 25 July 1956 in New York City and later raised in Leonia, New Jersey. His father Pierre Bourdain was a classical music industry executive for Columbia Records and mother Gladys Bourdain was a staff editor for The New York Times.

His ancestors were Catholic on his father's side and Jewish on his mother's side. His parental grandfathers were French. His ancestors migrated from Arcachon to New York during World War I.

He had graduated from the Dwight-Englewood School. Later, he enrolled at Vassar College but left studying just after 2 years. Later, he attended the Culinary Institute of America, graduating in 1978.

Anthony Bourdain had several restaurants in New York City including the Supper Club, One-Fifth Avenue, and Sullivan's. He became executive chef at Brasserie Les Halles based in Manhattan also in Miami. Bourdain's New York Times was the bestselling book Kitchen Confidential: Adventures in the Culinary Underbelly with its sequels. 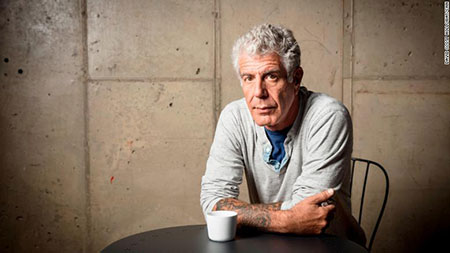 Anthony appeared in an episode of TLC's reality show Miami Ink A Cook's Tour, No Reservations, The Layover, and Parts Unknown.

Anthony Bourdain's Net Worth and Awards

The TV star, Anthony Bourdain had earned an amazing sum of money working as a chef, TV personality, and author. He had an estimated net worth of $16 million.

Bourdain was named Food Writer of the Year in 2001 by Bon Appetit magazine for Kitchen Confidential. She was nominated for an Emmy Award for Outstanding Informational Programming in 2007.

He was praised with a Peabody Award for the Anthony Bourdain: Parts Unknown in 2013.

Anthony tied a knot with his longtime girlfriend Nancy Putkoski in the year 1985 and maintained the conjugal life for almost two decades with a divorce in 2005. He married Ottavia Busia on 20 April 2007. The couple had a daughter, Ariane born in the same year of their marriage.

However, his second marriage was also an unsuccessful one. They got officially separated in 2016 and this time he's public with his new girl Asia Argento. They had a pretty awesome romantic life together. However, their love life came to an end after an unfortunate set of events.

Anthony Bourdain was found dead on June 8, 2018, because of an apparent suicide. He hung himself up at the Le Chambard hotel in Kaysersberg, France. Before his death, he traveled with friend Éric Ripert who became worried when he missed dinner and breakfast. The police reported his body bore no signs of violence, and that toxicology tests would determine whether drugs or medications were involved.

Following the death news of Bourdain's death, various celebrity and fans expressed sentiments of condolence via their social sites. Exactly 5 days later, on June 13, 2018, Anthony Bourdain's body was cremated in France. And just two days later, his ashes were returned to the US.

She is the first wife of Bourdain, who was his high-school girlfriend. The main reason for the divorce of this couple was Bourdain's massive travelling schedule.

She is his second wife, who has appeared in several episodes of No Reservations, notably the ones in Sardinia, Tuscany, Rome, Rio, and Naples.

She was born safe and healthy, weighing 7 lbs. 9 oz.