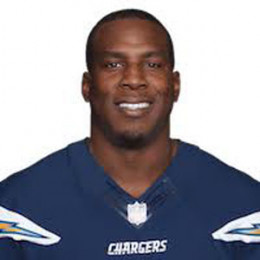 Antonio Ethan Gates Jr. an American football tight end plays in the National Football League (NFL) for Los Angeles Chargers. He got selected into Pro Bowl eight time and is a five-time All-Pro. He played basketball for NCCA before he got introduced to NFL scouts which made him change his career to football.

Antonio Ethan Gates Jr. was born on June 18, 1980, to Antonio and Mattie Gates in Detroit, Michigan and grew up playing with his best friend named Dwight Smith who was a year older than him.

As far as his nationality is concerned, he is American and belongs to Black-American ethnicity. He went to study at Michigan State University, to play basketball under then-coach Tom Izzo and football under coach Nick Saban.

Though his football coach wanted him to play only football, he chose to peruse a career in basketball instead and went to Eastern Michigan University. After playing three part of the season, he transferred to College of the Sequoias, in California to focus more on his academics.

Gates again transferred to Kent State University in northeastern Ohio recruited by Stan Heath. He played two seasons as a power forward when he became the member of Golden Flashes and scored 16.0 points, 8.1 rebounds and 2.7 assists per game. Also in 2003, he started playing for Kent State University as an undrafted free agent.

Gates was the one to win the first regular season of Mid-American Conference (MAC) championship in the school history after the regular season finished with 24-5 overall record and a 17-1 record in the MAC.

In his senior seasons, Gates got an Honorable Mention All-American Honors from the Associated Press after he secured 20.6 points, 7.7 rebounds and 4.1 assists per game.

Antonio Gates' career as a football player started after scouts told him that he was too much of a tweener to make in the NBA. He then arranged a workout in front of NFL scouts. Though he never played football, around 19 teams approached him for tryouts. At last, he chose to work out for San Diego Chargers, and after the Chargers recognized his potential, they instantly asked Gates to sign the contract as an undrafted free agent.

In 2003, Gates secured 24 passes for 389 yards and two scores. His performance led many experts to choose him to have a breakout season in 2004.

He secured 16.2 yards per reception which is considered to be the longest yards of his career. In 2004 season, he wrapped up with 81 receptions for 964 yards and 13 touchdowns.

During the seventh season, he got injured which slowed him down during the Chargers playoff run.

In 2008 season, February 23, it was stated that he would have foot surgery to fix the injury that occurred in the previous season and that it would take him 4 to 5 months to recover.

Though he was worried about his fitness during the opening day of 2008 season, he participated and played every game despite an injured toe. Gates completed the season securing 60 receptions for 704 yards and eight touchdowns.

The 2009 season was the finest of his career as he caught 79 passes for a career-high 1,157 yards with eight touchdowns. His team secured a total of 13 wins, one of the best records of the year.

In 2010 season, his playing was hindered by foot injuries. He, however, earned a spot in the Pro Bowl, for the seventh consecutive year, but his injury limited his participation in the games.

Because of the foot injuries he faced a lot of problems after the finishing 2011 season. The injury impacted him for several years and he was forced to sit out for 3 to 5 weeks because of the chronic foot problems.

In the same season, 2011, he got the opportunity to become all-time receptions leader of the Chargers on a six-yard catch on a 4th-and-5 early in the fourth quarter against Detroit which was his 587th career catch.

In the 2015 season, on July 2, 2015, the information about Gates being suspended was disseminated. The reason stated was that he violated the NFL’s rules on performance-enhancing drugs (PEDs).

After a four-game suspension, Antonio Gates returned to the game and scored his 100th and 101st career touchdown receptions. Later, on March 9, 2016, he was asked to sign two-year extension contract to play for Chargers.

In 2017 season while playing against the Miami Dolphins, he got his 112th career touchdown pass, setting a new record in NFL as a tight end for touchdowns.

Antonio Ethan Gates Jr is married to model Sasha Dindayal. The couple exchanged vows on July 9, 2011, and they reside in Encino, California at present. The couple share two children together, a daughter Ayla Gates and son Aven Gates.

Antonio Gates and his wife bought a newly built house in Encino worth $6.995 million.

Sasha Dindayal is a model. She with Antonio Gates share two children. Apparently, the couple is living a happy married life with no signs of a divorce.