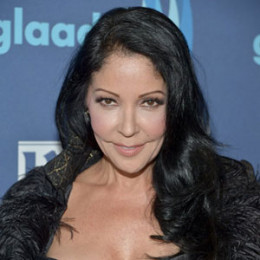 Born and raised in Santa Monica, Apollonia Kotero is an actress, singer, former model and talent manager. She is best recognized for her role as "Apollonia" in 1984 film, "Purple Rain". She is also a lead vocalist of the girl group, "Apollonia 6".

Kotero has enrolled herself in business as well. She is the founder of the multimedia entertainment company, Kotero Entertainment. She is possibly single at the moment but previously she has been married twice.

Apollonia Kotero was born Patricia Kotero on August 2, 1959, in Santa Monica, California, US. She is the eldest of six children to parents Victor Kotero and Socorro Koterio, the former was a restaurant manager and the later was a caregiver for the elderly. Her parents were immigrants from Mexico.

Kotero is American and belongs to the Hispanic ethnicity. At the young age of 16, she dropped out of high school to pursue modeling and acting.

Apollonia Kotero began her career as a model after winning the title of "Miss San Pedro". In the early 1980s, she stinted as a cheerleader for the pro-American football team Los Angeles Rams. She debuted in acting from movies like CHiPs, Tales of the Gold Monkey, Matt Houston, Fantasy Island, and Knight Rider.

Kotero featured in the music videos of 90's hit singer/songwriters Ray Parker Jr. and Eddie Money. In 1984, she made her TV debut with ABC TV movie, The Mystic Warrior where she portrayed the role of  Native American woman "Wicahpi".

She got her major break after late singer Prince signed her in his girl group, Vanity 6. She appeared in Purple Rain (1984) as a lead actress. The group was later renamed Apollonia 6 for the movie. The band has released several songs like "Happy Birthday", "Mr. Christian", "A Million Miles", "Sex Shooter", "In a Spanish Villa".

In 2009, Kotero also contributed to the cover of "When Doves Cry" for the ‘Spin’ magazine's 25th-anniversary tribute to the Purple Rain album, titled 'Purplish Rain'.

Her popular singles include "Sex Shooter", "Blue Limousine", "Take Me With You", "Mismatch", "The Same Dream" and "Since I Fell For You".

Apollonia Kotero has been active in the film industry since 1979 and during her almost 40 years career, she has earned a quite impressive net worth. As of 2018, her estimated net worth is $4 million. Here is the list of her salary:

Kotero owned a house in California of worth $2.5 million. The house consists of 3 bedrooms, bathrooms, along with big hall. In 1984, she was the part of a musical drama film, Purple Rain. The movie earned more than $70 million at the box office while it's budget is $7.2 million.

Apollonia Kotero is possibly single at the moment but previously she was married twice. Her first husband was a businessman, Kazja whom she married on February 16, 1980. However, the couple failed to handle their relationship and citing some irreconcilable differences they divorced in 1985.

Following the divorce, she met Kevin Bernhardt, an actor, screenwriter, and producer while working on the same project. At first, they were good friends but after few meetings, they eventually fell in love and got married. The couple exchanged vows in 1987 in an intimate ceremony.

Same as her previous relationship this also couldn't last long and the couple split apart after 10 years of marriage in 1997 under mutual understanding.

Once, she was also linked with the late singer, Prince. Their dating rumors spread like wildfire after the duo worked together on 1984 film, Purple Rain. Nonetheless, the duo never confirmed their alleged relationship.

Apollonia Kotero talked about her relationship with Prince and her movie, Purple Rain, check out the video below!

Greg Patschull is a renowned businessman. They tied the knot on February 16, 1980. However, the couple failed to handle their relationship and divorce in 1985.

Kevin Bernhardt is an actor, screenwriter, and producer. The couple exchanged a vow in 1987 at an intimate ceremony.