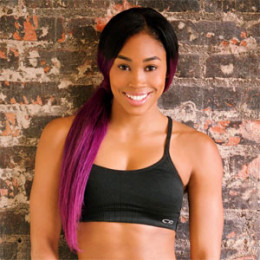 Ariane Andrew, an American professional wrestler, and popularly known by the ring name, Cameron Lynn. She joined Tough Enough in 2011 from where she began her wrestling career. Apart from this, she is also involved in singing, modeling, dancing and so on.

Ariane Andrew was born as Ariane Nicole Andrew on 3rd November 1987 in Northridge, Los Angeles, California with the birth sign Scorpio. She is an American and belongs to African American ethnicity.

She finished her schooling from Granada Hills Charter High School where she was one of the members of school’s drama club. After that, she graduated with the dual Bachelor degree of Arts in business marketing and Science in psychology from California State University.

Soon after her graduation, she moved to North Hollywood where she began to work as a behavior therapist for autistic children.

In 2011, she began her career in wrestling with the name Cameron. She participated in a non-televised Diva Search with World Wrestling Entertainment (WWE). After that, he competed as a contestant in a professional wrestling reality TV series, Tough Enough but was eliminated at the very first.

On July 2011, Andrew debuted as a ring announcer at WWE’s then-development territory, Florida Championship Wrestling (FCW) from where she earned her name as Cameron Lynn. She then competed in the Divas battle royal along with Caylee Turner, Audrey Marie, Aksana, Raquel Diaz, Maxine, and others.

Later on, on 9th January 2012, Cameron made her WWE roster debut on an episode of Raw and came out as a dancer and valets. During the same year, she debuted on Wrestle Mania XXVIII and in December, she won her first television match with her fellow Funkadactyl Noami.

AS of 2013, she won her first team match with Noami in the episode of Main Event against Snuka and Aksana. In the same year, she was defeated by Lee in the Smackdown after which she joined the Total Divas, a reality TV show.

In November 2015, she was in the Survivor Series where she competed in a four-on four-elimination tag team match but did not win the match. As of 2017, she will be competing on the upcoming MTV reality series, The Challenge: Champs vs. Stars which is to be held on 21st November.

Cameron was in a relationship with Vincent Isayan from September 2012. The pair were happy and even were planning to get married soon. But due to some issues, the couple broke up on 24th May 2017.

She is now close to an Australian born PR who is living in LA named, Matt Dillon. Both of them are spotted at many places and also posted several pictures together on social media that shows they enjoy each others company and are happy. But they have yet not revealed anything about their relationship so they might be friends rather than dating.

Furthermore, she was part of a controversy after she made a statement about dating black boys but wants to date white guys to have beautiful children. But later on, she made clear from her video on YouTube where she denied being a racist and added that she was putting her point of view and nothing more than that.

The beautiful wrestler is also involved in modeling and dancing as well. Apart from this she even has her own You Tuber Channel named Ariane Andrew where she posts several videos like makeup tutorials, traveling blogs and others. From all those sources she might have collected a net worth in 6 digits.