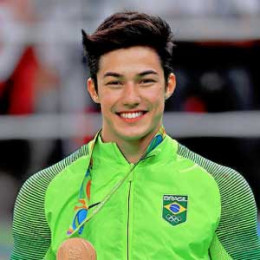 The handsome and muscular gymnast, Arthur Mariano is the desirable man of many ladies. He has a huge fan following of 1.8 million on Instagram. Arthur is one of the successful national players of Brazil. Arthur earned fame after winning a bronze medal in 2016 Summer Olympic. He is not single and is dating the 19 years old gymnast player, Simone Biles.

Born on 18th September 1993 in Campinas as Arthur Nory Oyakawa Mariano, after his father guidance, started learning and practicing judo as a child in a club. Arthur changed his mind from judo to gymnastics after watching the classes of gymnastics. When he was at his early age, his parents divorced.

His custody was given to his mother, and they shifted to Sao Paulo. There he joined a gymnastic Esporte Club Pinheiros when he was 11 and won the Brazilian Child Gymnastic Championship at 14. Arthur graduated from Universidade Paulista.

In 2015, he participated in World Artistic Gymnastics Championship and placed 12th all-around and fourth in the horizontal bar. Mariano came to limelight after winning a bronze medal in 2016 Summer Olympic in Rio for men's gymnastics floor exercise. He had a good physique due to which a lot of ladies desire him. During his training, he was hurt and injured for several times.

In 2013, he suffered from micro-fractures in the right shoulder during the competition. Once he almost lost his eyesight when a ring strap hit his eyes. For this, he underwent surgery. Again he had an injury in his knee and ankle during Olympics.

Arthur posted a snap chat video with his mates, Felipe Arakawa and Henrique Flores. The video was a joke on racism addressing another team member named, Angelo Assuncao. Moreover, in 2015, Arthur along with his mates was suspended from the national team for a week. Furthermore, after one of his teammates won a bronze medal in 2016 Olympic, Arthur posted another video apologizing for his mistake to the victim.

The dashing, Arthur Mariano is reportedly dating a fellow Brazillian gymnast Jade Barbosa. The rumors about their relationship first came to surface when Arthur shared a picture with her and added a heart emoji on the caption.

Jade also shares a lot of pictures of the duo. Although, the couple is yet to formally announce their relationship to the public.

Both of them plays the same sport and looks like their relationship must have gained its prominence while they were performing in the same country.

Arthur Mariano might have a net worth in millions. He might earn a good amount from the gymnastics as he is one of the successful  Brazilian national players.