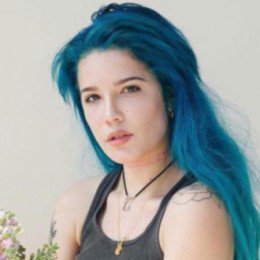 Ashley Nicolette Frangipane, best known by her stage name Halsey is a singer, songwriter and recording artist. She is noted for her single tracks titled: "Hurricane", "Ghost," and "New Americana". After releasing a parody of the Taylor Swift song "I Knew You Were Trouble" in 2012, she began her singing career while she started songwriting at the age of 17. She is biracial, her mother is an Italian American and her father is African American.

This gorgeous young lady is yet unmarried. As she is so attractive, guys fall for her just in a matter of seconds but these days she is dating a Norwegian hip hop artist and rapper. Besides, she was rumored of dating Josh Dun and Ashton Irwin, but she stated those as hoaxes. To know her better and get updated about her daily activities we can simply follow her on Twitter @ashleyfrang.