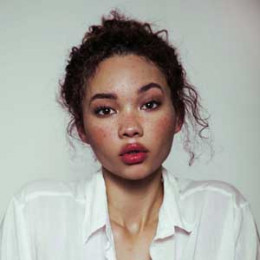 Ashley Moore is an American model turned actress, who came to limelight after she went to launch with Justin Bieber. She is also known for her work in Kohls and GQ magazine. She is from a multi-racial ethnicity and holds the citizenship of America. This beautiful model was inspired by Chanel Iman, Cara Delavigne, Kate Moss and they are her role model.

Born on 15th July 1993, Ashley Moore, spent childhood along with her sibling sister. She is from a military family and has traveled a lot including Northern California and Los Angeles. From her childhood, she was interested acting and modeling.

Later, she pursued her career as a model with a good personality, confidence, attitude, and courage. Moreover, she loves reading books, watching movies and hanging around the beach side.

Before joining modeling career, Ashley visited several modeling agencies. She also gave an interview with itsaoao.com and moved to Los Angeles for modeling. However, her height was an issue and got rejected every time.

Later she got a call and was signed with Nous Model Management. She got an opportunities to travel different places and learn all the qualities that one successful model should have.

She is better known for Popstar: Never Stop Never Stopping and Drake Fet. Majid Jordan: Hold On, We’re Going Home. But, she came to limelight after she went out with Justin Bieber.

Ashley was rumored to be in a relationship with Lil Twist, American rapper. But it was later revealed that they were just friends.

Later, Ashley was linked up with famous singer Justin Bieber in March 2015 while the pair was at Little Angeles Clippers Game. After that, they were spotted together in different places. Somehow, her relationship with Justin did not last long.

Though the couple broke up, they are still good friends and were spotted on a hike on 27th February 2017. Currently, she is single and enjoying her single life focusing on her career.

Ashley's exact net worth is not dislosed. But her lavish lifestyle is a proof of her earnings. She has a house in Fayetteville, North Carolina and also has a house in Los Angeles.