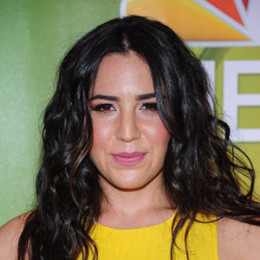 Audrey Esparza is one of the struggling actors of the United States. Some of the movies and television series she has starred in are The Following (2013), The Americans (2013), Amateurs (2013), Floating Sunflowers (2014) to name a few. Her popularity has risen after her role in NBC drama Blindspot. She is widely known for her role of Tasha Zapata, an FBI agent who suffers from a gambling problem after her partner's death in NBC's Blindspot.

Audrey Esparza was born on 5th March 1983, in Laredo, Texas, United States. She is the daughter of Felipe Heberto Esparza and Sandra Lee. She has two siblings.

When Esparza was only 18, she moved to New York City to study acting. There, she joined New York University's Tisch School of Arts and completed her four years training. During her time at TSA, she was involved in the Experimental Theatre Wing.

Esparza is best known for her role as FBI agent Tasha Zapata, on the American television series Blindspot. She made her television debut in 2011, with the television film Family Practice where she worked as Liz Stratton.

Digging through the internet, it has been most difficult part to know about her marital status. Her relationship status is not yet confirmed on whether the actress is involved romantically with anyone. There isn’t any controversy or even rumors that surround her so far. Very few details are made open regarding her personal life except the information regarding her acting career.

Esparza is one of those actresses who carefully maintains the balance between self-care and work-life. She portrays the role of an agent in the series Blindspot and for the character, she needs to look fit and healthy.

In an interview with Self, she said,

"Being active is a huge part of who I am, but being on a television show makes it complicated to find time, so sometimes you have to be pretty creative."

"I do a lot of different things, it really just depends on my day.  I feel like part of my job as an actor is to be in my body."

Audrey's focus towards her diet and exercise has inspired thousands of her fans to be healthy and happy.

Audrey Esparza's net worth is estimated to be $2 million. Her source of income includes her salary and earnings from her career as an actress. She reportedly earns $50,000 per episode playing the role of Tasha Zapata in Blindspot.