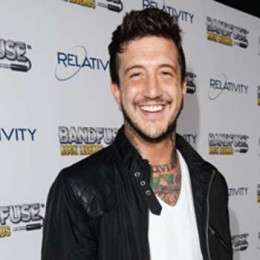 He is an American musician, who currently serves as the lead front-man of the metalcore band Of Mice & Men. He formed the band with bassist Aaron Pauley, lead guitarist Phil Manansala, rhythm guitarist Alan Ashby and drummer Valentino Arteaga. Previously, he was the lead vocalist for the band Attack Attack!. He was educated at Lehigh Senior High School. The band Of Mice & Men released two albums The Flood in 2011 and Restoring Force in 2014.

Accounting his personal life, he is currently in a serious relationship with his girlfriend who by profession is an actress, singer and a professional model. They are in a relationship since 2015 and the couple are often spotted together at various events and places. He was once married to a gorgeous lady, but their marital relation didn't last for a long time resulting in divorce. We can stay connected and know him better by following him on Twitter @austincarlile.

She is the first wife of Austin, whose personal details has not been disclosed to the media yet.