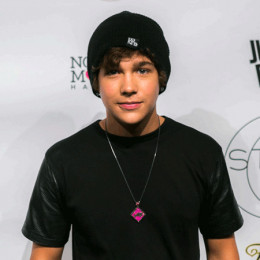 An American teen pop singer, dancer and song writer who raise to prominence due to his several viral videos of his 2011 performances through which he became popular as 'second coming of Justin Bieber.' He is son to Michele Lee and Charles Edgar Mahone. After his father died when he was just one and half year old, he was raised by his single mother. He completed his high-school from Lady Bird Johnson High School. He started his career by posting YouTube videos in June 2010 alongside his friend Alex Constancio. After he released his first single "11:11," it charted to #19 position on the Billboard Heatseekers Songs chart and his another second single, "Say Somethin" charted to #34 position on the Billboard Pop Songs chart. Currently he is signed to Cash Money Records, Young Money Entertainment and Republic Records.

Young and handsome singer has not married yet. Though he has not married that does not mean he is still single. Till now he has dated few celebrities including popular singers and actress. Currently, he is in relationship with a singer. Their relationship came into light of media after it was confirmed that they spend his birthday together on a yacht. Prior to being relationship with her, he had dated band member of Fifth Harmony girls.