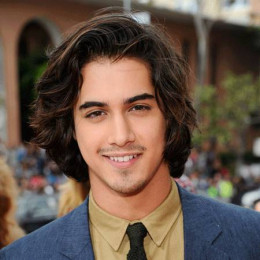 A Canadian actor and singer who starred in television screen as Beck Oliver in Nickelodeon's Victorious and also in the film iParty With Victorious.

Exploring his personal life he has not married yet. Handsome actor's name has been linked with many celebrities. He is dating an American actress. Together they seem very cute couple. It is said that due to their mutual friend they came to know each other.

Till now there has been nor rumor or report regarding his relationship with other girls beside her which proves that he is loyal to his current girlfriend.

Avan Jogia holds an estimated net worth of $1 million.

Avan Jogia was born on February 9, 1992, in Canada. His father is of British Indian descent who migrated from India to Canada. His mother is of Welsh, English and German descent. He can speak Gujarati too.

Avan debuted in television screen starring in three episodes of the CW's Aliens in America. He was in lead role in television movie named "A Girl Like Me: The Gwen Araujo Story" which is also an award-winning movie.