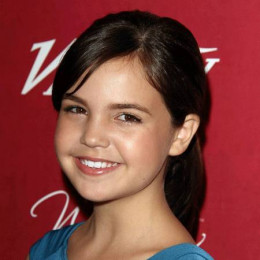 An American young and gorgeous actress who is popular for her role as Young Snow White on ABC hit Series "Once Upon a Time". She is the youngest among her seven siblings. She is daughter of Patricia Riley. Interesting fact is that she started her career when she was just 2 weeks old by starring in an Office Depot commercial. She has already appeared in commercial of popular compa

Talking about her personal life she is too young to get married. But that does not mean that she is single. She was once rumored to have a relationship with a teen actor Zachary Gordon in 2013 which she clarified as they are just best buddies. Currently she is dating a singer who is also band member of Forever in Your Mind band. They have already publicized their relationship in social medias like Facebook, Twitter. She is happy in her relationship and is also concentrating on her career. No other rumors or controversial issues are seen on her so far.