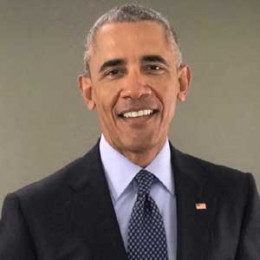 American popular politician, Barack Obama worked as the 44th President of the United States from 2009 to 2017.He is the first African-American to work in the office as commander-in-chief. During his presidential period, he ordered a military intervention in Iraq in response to gains made by ISIL after the 2011 withdrawal from Iraq, continued the process of ending U.S. combat operations in Afghanistan. Moreover, he promoted discussions that led to the 2015 Paris Agreement on global climate change, initiated the sanctions against Russia following the invasion of Ukraine, brokered a nuclear deal with Iran, and normalized U.S. relations with Cuba.

After graduating from Columbia, Barack Obama was hired in Chicago as the director of the Developing Communities Project, a church-based community organization.

From 1994 to 2002, he was one of the boards of directors of the Woods Fund of Chicago, the first foundation to fund the Developing Communities Project.

He was re-elected to the Illinois Senate in 1998, defeating Republican Yesse Yehudah in the general election.

On 10th February 2007, Obama declared his candidacy for President of the United States in front of the Old State Capitol building in Springfield, Illinois.

On 6th November 2012, he obtained 332 electoral votes, exceeding the 270 required for him to be re-elected as president.

On 27th February 2009, he announced that combat operations in Iraq would end within 18 months.

Obama won a Grammy for Best Spoken Word Album for abridged audiobook versions of 'Dreams from My Father' in February 2006 and also for 'The Audacity of Hope' in February 2008.

In his book entitled 'RISING STAR: The Making of Barack Obama' he revealed that before his marriage to Michelle Obama, he dated Sheila Miyoshi Jager, a professor at Oberlin College.She refused his proposal at the time because of her mother.

Barack Obama married Michelle Obama, Forma lawyer, and a writer and became the First Lady of the United States from 2009 to 2017. The couple married in 1992, in Trinity United Church of Christ, Chicago, Illinois, United States.They met at Chicago law firm.

The beautiful couple is blessed with two beautiful daughters, namely, Malia Ann Obama, their first child, was born on 4th July 1998 and Sasha Obama was born on 10th June 2001.

The '2017 C-SPAN Presidential Historians Survey' ranked Obama as the 12th best US president. His presidency ended on 20th January 2017, for his Republican successor, Donald Trump.

Regarding his nationality, he is an American, who belongs to African-American ethnicity.He stands in the height of 6 feet and 1 inches.

Obama has a net worth of $12.2 million, and his wife is not far behind with a net worth of $11.8 million. From his job as the president, Barack Obama earned $400,000 a year throughout his entire eight-year term.

Barack Obama married Michelle Obama, lawyer, and writer who became First Lady of the United States from 2009 to 2017. The couple married in 1992.

His daughters Malia Ann Obama was born on 4th July 1998.