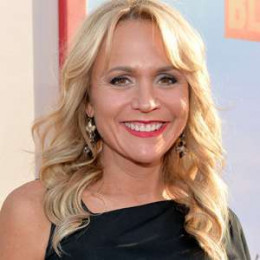 Barbara Alyn Woods is an American actress best known for her roles in television series "One Tree Hill" and "Honey, I Shrunk the Kids". She attended Northern Illinois University where she studied theater. Before acting career, Barbara Alyn Woods used to perform in "The Victory Gardens Theatre" in her hometown Chicago, Illinois. She currently plays Deb Scott in the popular teen drama One Tree Hill.

Barbara Alyn Woods has appeared on both the big and small screens, acting in movies including "Striptease", starring Demi Moore, "I Downloaded a Ghost" and "The Waterdance". She is mostly known for her role as Dawn Szalinski in Disney's "Honey I Shrunk the Kids" TV Show. Barbara is married to John Lind since 1999 and has three children with him, all of them daughters.

Barbara met John on the sets of “Honey, I Shrunk the Kids: The TV Show”. They dated for a year before getting married.

Natalie is an American actress known for her works in TV series The Goldbergs and Gotham.

Emily is a child actress and a singer. She is best known for her work on the ABC series Revenge.

Alyvia is also a child actress working on the series “The Young and the Restless.” She and her sisters just finished work on a movie for Universal called “Mockingbird.”