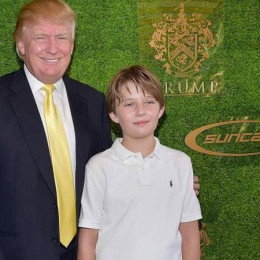 Barron Trump is best known as the youngest son of Donald Trump, an American businessman and President of the United States and only son of Melania Trump, a Slovene-born American former model. He is attending the Columbia Grammar & Preparatory School in Manhattan. Barron is fluent in English as well as Slovene. During his early childhood, Trump made several television appearances such as ' The Apprentice' and 'The Oprah Winfrey Show'.

Barron Trump's mother assumes the role of 'First Lady of the United States on 20th January 2017 as well as the second foreign-born 'First Lady' of the United States, following Louisa Adams in 1825. Barron is a grandson of Amelia and Viktor Knaus, who managed car and motorcycle dealerships for a state-owned vehicle manufacturer. Barron Trump has kept his personal life secret.