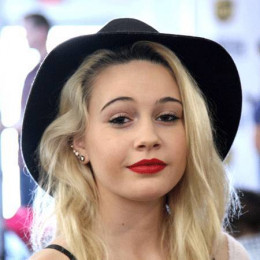 Beatrice Annika Miller commonly known as "Bea Miller" is a singer, songwriter and actress. She is well known to public as a contestant of The X Factor season 2(US based), where she finished in ninth place. In 2015, for her single debut song "Young Blood" she won Radio Disney Music Awards for "Best Song to Rock Out to With Your BFF". She has two mother, Kim Miller, a former stage manager at CBS and Hilery Kipnis, a former producer for The Oprah Winfrey Show.

Talking about her personal life, she is just a teen age girl and is too young to have a boyfriend. As she is so charming and talented, lots of boys fall for her easily but she is currently rumored of being in relationship with a boy. Their photos are all over twitter and lots of followers are concerned about her relationship. This probably is her first relation. There is no any rumors about her.