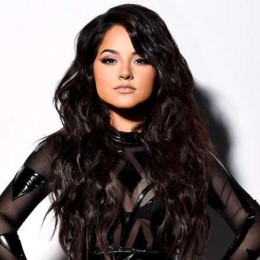 Rebbeca Marie Gomez better known as "Becky G", is a singer, actress and rapper. She rose to fame in 2011, after posting several videos of herself performing remixes of popular songs on to YouTube. With her single track "Shower" released in 2014, she had her first Billboard Hot 100 entry, peaking at No. 16. She is the daughter of Frank Gomez and Alejandra Gomez and has a Mexican descent.

Accounting her personal life, she is yet unmarried as she is too young for this. Her current relationship status is single, which is a good news for all her male fans. These days she is busy trying to make some more hit songs so she isn't involved in any kind of relationship stuffs. To stay connected and get her daily updates we can simply follow her on Twitter @iambeckyg.