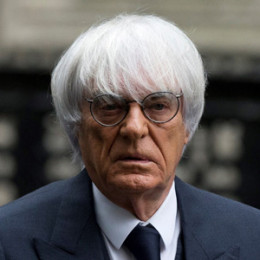 Bernard Charles Ecclestone, better known as Bernie Ecclestone, is a British business magnate. He was the chief executive of the Formula One Group. He and business partner Flavio Briatore owned the English football club Queens Park Rangers between 2007 and 2011. After two unsuccessful marital relationships with Ivy Bamford and Slavica Ecclestone, he is currently married to Fabiana Flosi.

Bernie Ecclestone was born on 28th October 1930, Bungay, Suffolk, England, Uk.The family later moved to Danson Road, Bexleyheath South East London during 1938. He is the son of a fisherman.

He studied in a primary school in Wissett and then attended West Central Secondary School, Dartford but left the school at the age of 16 to work as an assistant in the chemical laboratory at the local gasworks testing and gas purity. Later, he studied chemistry at Woolwich Polytechnic.

Bernie started his career trading spare parts for motorcycles and formed the Compton & Eccleston motorcycle dealership with Fred Compton soon after the end of World War II. During the period, he competed in the 500cc Formula 3 Series in 1949. Also, he participated in limited numbers of races including his local circuit, Brand Hatch where he achieved a number of good placing and occasional wins.

Initially, he retired from the racing following several accidents at Brands Hatch and focused on his business. Then he made lucrative investments in real estates and loan financing and to manage the Weekend Car Auctions firm.

And in 1957, he returned to racing as manager of driver Stuart Lewis Evans and purchased two chassis from the disbanded Connaught F1 team whose driver line-up over the years included Stuart Lewis-Evans, Roy Salvadori, Archie Scott Brown and Ivor Bueb.

The following year, he moved to the Vanwell team and managed Lewis-Evans. In the match, Lewis suffered burns when his engine exploded at the 1958 Moroccan Grand Prix and died from the effect of the injury six days later. Once again, he retired from the racing.

In the 1970s, his friendship with Salvadori led to him becoming the manager of driver Jochen Rindt and a partial owner of Rindt’s 1970 Lotus Formula 2 team. Rindt died in a crash at the Monza circuit in the 1970 World Championship though he was awarded the championship posthumously.

In 1971, he purchased the Brabham team from Ron Taueanac: as Ecclestone made him an offer of £100,000 and eventually accepted. During the 1972 season, he formed the team to fit his vision of a Formula One team and in 1973 season, he promoted Gordon Murry to chief designer.

Two years later, the Brabham-Alfa era ended with the up-and-coming young Brazilian Nelson Piquet when Alfa Romeo started testing their own Formula One car during the season. Nelson formed long, and close relationship with Bernie and the team also won the season in 1981 and 1983.

The team continued to compete until 1985, but unfortunately, Nelson left after seven years. After the 1987 season, he sold the team, Brabham to a Swiss businessman, Joachim Luhti in $5 million.

Apart from his racing career, he formed Formula One Constructors Association (FOCA) in 1974 along with Frank Williams, Colin Chapman, Teddy Mayer, Ken Tyrrell and Max Mosley. In 1978, he became chief executive of FOCA with Mosley.

After working several years for the Formula One Group, he was removed from the chief executive position on 23rd January 2017 which was a takeover by Liberty Media in 2016.

Furthermore, he and Flavio Briatore had once bought Queen Park Rangers (QPR) Football Club, in 3rd September 2007. And in 17th December 2010, he had purchased the majority of shares from Flavio Briatore becoming the majority shareholder with 62% of the shares. The following year, he and Briatore sold their entire shareholding in the club to Tony Fernandes, ownership of the Caterham Formula 1 team.

Bernie has been married thrice in his life time. Bernie married Ivy Bamford, in mid-1952. From his first wife, he has a daughter, Deborah Ecclestone. Then he was linked up with Tuana Tan, in and had 17 years of a relationship with her. The couple break-up after his second wife, Slavica Radic become pregnant.

After he split with Tuana Tan, he married Slavica Ecclestone Radic, an international fashion model, in 1985. The husband and wife despite their 28-year age difference, they tied the knot. They even crossed the language barrier: as he spoke English whereas she spoke Croatian and Italian. There is also a height difference between them: Bernie is 5 ft 2 inch whereas Slavica is 6 feet 2 inch.

They had two daughters: Tamara and Petra. After living together for 23 years, Slavica filed for a divorce and moved on with her daughters in November 2008, and the divorce was finalized in 2009.

As per the divorce settlement, he paid $1 to $1.5 billion to Slavica Ecclestone. Later, during Bernie's German bribery trial, information about Silvia paying £60 million a year to him as part of their 2009 divorce emerged.

After three years, he married Fabiana Flosi, Vice-President of Marketing for the Brazilian Grand Prix, in April 2012. The couple secretly got married, and their relationship was made public on 26th August 2012.

Ecclestone was accused of bribery after Gerhard Gribkowsky confessed to the charges of tax evasion, breach of trust and for accepting bribes. According to the prospector and defendant, he paid $44 million to the former banker to get rid of the lender’s stake in Formula One.

He also announced that Gribkowsky blackmailed him with telling UK tax authorities about a family trust controlled by Ecclestone’s former wife. As per the interview conducted by a German prospector in the Gerhard Gribkowsky case showed that Ecclestone had been under investigation by the UK tax authorities for nine years and later Inland Revenue agreed to conclude the matter in 2008 with a payment of £10 million.

In 1997, he was involved in a political controversy over the British Labour Party's policy on tobacco sponsorship not only this, but he also spoke about IndyCar racer Danica Patrick and remarked that women should be dressed in white like all the domestic appliances, later apologizing for the comments.

In 2016, following his 2015 campaign for an all woman championship - were opposed by drivers and manufacturers alike where he declared that teams wouldn't select a female driver if they could find a competent male but Susie Wolff launched, Dare to be Different campaign and proved him wrong.

According to the Times interview published on 4th July 2009, Ecclestone said "terrible to say this I suppose, but apart from the fact that Hitler got taken away and persuaded to do things that I have no idea whether he wanted to do or not, he was - in the way that he could command a lot of people - able to get things done." Later he apologized saying that his comments were taken in the wrong way and said "I'm just sorry that I was an idiot. I sincerely, genuinely apologize."

Bernie has successfully collected an estimated net worth of $3.1 billion. As he bought the team from Ron Truranac for approximately $120,000 at the end of 1971, later, he sold it for over $5 million to Swiss Businessman, Joachim Luhti.

Currently, he lives in the lavish Chelsea villa priced around $10 million. The bungalow includes swimming pool, jacuzzi, sauna, home office, parking lot and helicopter pad. Also, he owns luxurious cars among which, his favorite one is SUV manufactured by Lexus.

In early 2004, he sold one of his London residences in Kensington Palace Gardens to steel magnate Lakshmi Mittal for £57.1 million. Also, he sold £9 million yacht Va Bene to his friend Eric Claton, in 2005.

Iva Bamford is the first wife of Bernie Ecclestone to whom he married in 1952. They are blessed with a daughter, Deborah Ecclestone.

After Bernard divorced Ivy Bamford, he married Slavica Radic, in 1984. Slavica is an International fashion model who walked for some of the leading clients including the famous designer Armani.

Currently, Bernie Ecclestone is in a marital relationship with Fabiana Flosi. Fabiana Flosi is the Vice-President of Marketing for the Brazilian Grand Prix.

Born in 1955, Deborah Ecclestone is the one only daughter of Bernie Ecclestone and Ivy Bamford.