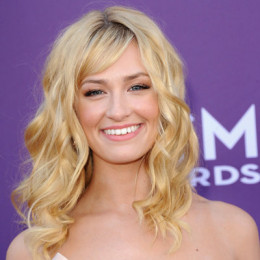 She is an American actress who is known best for her performance in the TNT television series Leverage as Parker that aired from 2008 till 2012. She is the youngest kid among the 6 children of her parents. She went to Cimarron-Memorial High School where she also served as the student body president. She was voted as the "Most Admired Senior" in her high school and been the senior prom queen. She has graduated with honors. She debut in acting since 1999.

She had previously dated with an actor and were engaged to marry. They have a child together. However, the relationship ended after nearly 7 years of togetherness. There is no any rumor or relationship status available on her after her divorce. She is currently single and searching for the man who can be her husband and father to her child. She loves to spend her time with her child.

Beth Riesgraf ended her seven years of relationship with Jason Lee until 2007. They even share a son named Pilot Inspektor Lee whom they welcomed on September 28, 2003.

After that, she Beth started dating an Irish actor Alan Smyth in 2009 and started living together in her house in Los Feliz.

As of 2019, Actress Beth Riesgraf has an estimated net worth of $3  million as per Celebrity Net Worth while her salary has not been revealed publicly yet.

Beth Riesgraf was born Beth Jean Riesgraf on 24th August 1978 in Minnesota, the U.S.A under the birth sign Virgo. She is an American by nationality and as far as her ethnicity is concerned, she is White. Riesgraf is the daughter of Elroy Othmar Riesgraf and Janet Ann Riesgraf.