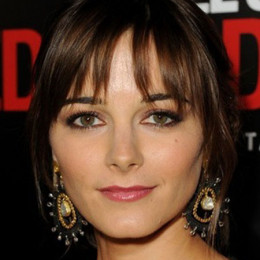 She is a talented actress, known for her role in films like Devil, The Little Death and for her Film Critics Circle of Australia Award-winning performance in the 2011 movie Burning Man. Recently, she has portrayed in a science fiction film Beyond Skyline, a sequel of Skyline. In 2002, she graduated with a degree in Performing Arts (Acting) from Australia's National Institute of Dramatic Art. She was born to Serbian parents and is of Serbian ethnicity.

Moving on to her personal life, she is yet unmarried but isn't single. These days she has been dating a handsome Canadian actor and producer with whom she was recently spotted in a dinner date. The two might have some plans of being an official couple in near future. Prior to this relationship, she had dated an American actor. She does not have any child from any of her relationships.

Bojana Novakovic was born on July 1981 in Belgrade, SR Serbia, SFR Yugoslavia to Serbian parents. She is Australian-Serbian and belongs to the White ethnicity. At the age of 7, she moved to Australia along with her parents. She was raised along with her younger sister, Valentina who is also an actress.

Novakovic joined The McDonald College in Sydney where she was dux in 1999. She graduated from the National Institute of Dramatic Art (NIDA) in 2002 with a bachelor's degree in dramatic arts.

Bojana Novakovic started her professional acting career in 1994. She played the Gymnast role in House of Fun but her screen credit goes uncredited. In 1999, she appeared in six TV series including, Heartbreak High, Big Sky, Strange Fits of Passion, Wildside, Murder Call and All Saints.

Novakovic won  AFI Award for "Best Actress in a Leading Role in a Television Drama or Comedy" for her role as Randa in the ABC miniseries, Making Time.

Bojana Novakovic is possibly single at the moment. She is ambitious and hardworking and didn't like to share much about her private stuff with media.

Novakovic has an estimated net worth of $3 million which she accumulated from her acting career.