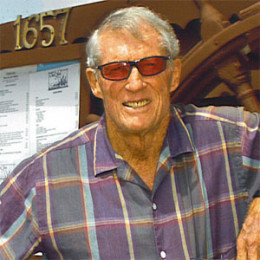 Brad Harris, 84, is an American stuntman, actor and an executive producer who has featured in numerous roles in more than 50 movies, mostly in European productions. Further, he is a member of the Stuntman’s Hall of Fame.

Harris was born on July 16, 1933, in St.Anthony, U.S. As far as his ethnicity is concerned he is White American and holds the American nationality. He was born in Idaho but grew up in California after his family moved there.

Harris attended Burbank High School and joined UCLA, a public research university in Los Angeles as he received an athletic scholarship to study economics. When he enrolled at the University, his knee was injured while playing football. He was advised to take up weightlifting to strengthen the injury. That evidence developed his interest in bodybuilding.

Harris entered the films as a stand-in stuntman first and then as an actor. He first featured in Monkey on My Back and Li’l Abner. He traveled to Rome to watch the 1960 summer Olympics and perform stunts in Spartacus, an American drama directed by Stanley Kubrick.

Furthermore, the actor stayed in Europe for the boom in European Eurospy, Spaghetti Western genres and Sword, and Sandal. While working in Germany, he found that the stunt coordinators of Germany were nonexistent, so he did extra duties as a stunt coordinator, stuntman as well as an actor.

In 1961, Harris made his debut as a leading man in the title role of Gianfranco Parolini’s Goliath Against the Giants and Samson. He continued his characters in the movies written and directed by Parolini. Additionally, he began to be teamed up with Tony Kendall and Parolini in the Kommissar X series and The Three Fantastic SupermanII Fantastici Tre Supermen series.

Besides, acting the proficient actor also served as an executive director in several movies including The Mutations and King of Kong Island. Later on, he made several appearances on the American soap opera entitled Falcon Crest with a role as Deputy Duffy. His most recent movie was Boom, directed by Andrea Zaccariello released in 1999.

Moreover, Harris invented and marketed exercise products named AB-OrigOnals. He owns a company called Modern Body Design.  In 2015, the talented actor, Harris was awarded the Achievement Award in humanities distributed by the University of Arizona.

Brad Harris was married to Olga Schoberova, a Czech actress. They met for the first time on the set of Black Eagle of Santa Fe, a western movie directed by Ernst Hofbauer and Alberto Cardone.

The couple dated for several years and eventually got hitched on November 16, 1967. As husband-wife, they had a daughter named Sabrina. After two years of their marriage, the pair divorced in 1969.

Brad Harris is living a luxurious life, but his net worth has not been revealed yet. His famous movie, Li’l Abner was able to bag the box office succession with $3,200,000. So, we can believe that his earning has been increasing after that movie.

The talented actor was married to his co-actress Olga. The couple dated each other for several months before exchanging vows.

Brad Harris and Olga were married in 1965. The couple was blessed with a daughter named Sabrina Harris.