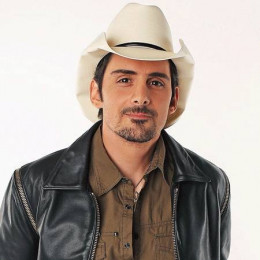 Brad Douglas Paisley is a country singer, songwriter, and musician. On U.S. Billboard Country Airplay chart, he has been able to score 32 Top 10 singles in which 19 of them have reached no.1. He has won 14 Academy of Country Music Awards, 14 Country Music Association Awards, three Grammy Awards, and two American Music Awards.

Brad Paisley holds an estimated net worth of $95 million.

Brad Paisley was born on October 28, 1972, in Glen Dale, West Virginia, United States. He is the son of Sandra Jean Paisley, a teacher and Douglas Edward Paisley, a worker at West Virginia Department of Transportation.

She is an American actress who is known for her performance in Father of the Bride. The couple started dating in 2001.

He is the first child born to Brad and his wife. His parents call him "Huck".

He was born healthy. His pictures can be viewed on the internet.