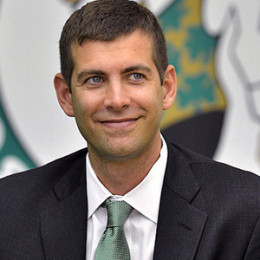 An American professional basketball head coach, Brad Stevens is known for a calm and focused coaching style. He was born to parents Jan Stevens and Mark Stevens. Stevens attended DePauw University, where he used to play basketball and gained a degree in economics. Stevens became the head coach after Todd Lickliter left to coach the Iowa Hawkeyes in the year 2007.

In his first year, Stevens led Butler to 30 wins, becoming the third-youngest head coach in NCAA Division I history to have a 30-win season. At the age of 30, Stevens became the second-youngest head coach to coach in the NCAA National Championship Game, behind Branch McCracken who led the Indiana Hoosiers to the 1940 National Championship. Stevens is currently married to Tracy Wilhelmy Stevens since 2003. He is the father of two children named, Kinsley Stevens and Brady Stevens.

Brad Stevens was born as Bradley Kent Stevens on October 22, 1976. He is the son of Mark Stevens and Jan Stevens. He grew up in Zionsville, Indiana where he had his basic education and developed a passion for basketball. He went to Zionsville Community High School.

Stevens played for the school’s basketball team and recorded four consecutive wins in his time with the team. Alongside his BA degree in Economics, Stevens left a remarkable record in the University as a three-time Academic All-America nominee student.

Stevens transitioned into coaching after quitting his job at Eli Lilly and Company, joining the basketball program at Butler University as a volunteer prior to the 2000–01 season. After five seasons as the assistant coach, he took the position of head coach on April 4, 2007.

In 2010, his third year as head coach, Stevens broke the NCAA record for most wins in a coach's first three years. He coached the Bulldogs in their second consecutive national championship game on April 4, 2011. Stevens was regularly named a finalist for Horizon League Coach of the Year award, winning twice.

This success landed Stevens a job with the NBA's Boston Celtics in 2013 when he signed a six-year contract. He led the Celtics to the NBA Playoffs every year since 2015, won a division championship, and appeared in the Eastern Conference Finals in each of his last two seasons.

Bard Stevens is married to Tracy Wilhelmy Stevens. They met while they were both studying at DePauw University. She was an avid soccer player and the pair quickly bonded over their mutual love of sports.

On their first date, he drove Tracy one and a half hours away for a high school basketball game; the long journey allowed them to get to know each other and they began dating regularly.

After years of dating, the couple finally tied the knot in August 2003. They share two children together named Brady Stevens and Kinsley Stevens.

During an interview, Brad compared being the Celtics coach to being a father in the sense that he puts forth his best effort on the sidelines the same way he does at home. He said:

When Brad was hired by the Celtics his wife was actually the one that negotiated his contract, it was reported shortly after he was officially announced as the coach.

Currently, Brad still coaches NBA basketball professionally and Tracy works as his manager. Brad remarked humorously that he is the only person in the sport that gives his agent '100-percent of his paycheck'.

Brad Stevens' net worth is estimated to be $6 million while his salary stands at $3 million annually.  He signed a $22-million-dollar contract to become the head coach of Bolton Celtics in 2013.

Brad lives with his wife in Ohio in a luxurious $550,000 (approx) house with a mini basketball court and a full-size swimming pool. Meanwhile, Tracy Stevens' net worth is estimated to be $1 million.

Stevens is currently married to Tracy Wilhelmy Stevens since 2003. He is the father of two children named, Kinsley Stevens and Brady Stevens.

Kinsley Stevens has one brother.Her parent's has not revealed her date of birth publicly.

Brady Stevens has one sister but his parent's has not revealed his date of birth publicly.