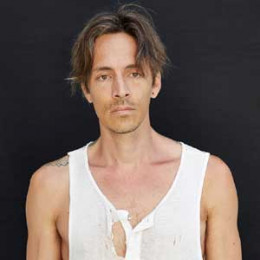 An American singer, musician, songwriter, Brandon Boyd is best known as a lead vocalist of Incubus, an American multi-platinum rock band. Brandon is also a visual artist plus author too. He is famous mainly among the youngsters. Boyd has a good fan following of 186k on Twitter and 312k on Instagram. He is now in relation with Baelyn Neff.

Born to parents, Priscilla ''Dolly" Wiseman and Charles Boyd on 15th February 1976 as Brandon Charles Boyd in Van Nuys, California comes from the entertainment background. He was encouraged right from his childhood.

Boyd was raised in Calabasas, California along with his elder brother, Jason Boyd. Jason is currently the lead singer of Audiovent band. He was once burnt by hot water during his childhood. At the age of 15, he got his first tattoo

Brandon completed his schooling from Calabasas High School in 1994 and later on joined Moorpark College for two years. After college, he joined Incubus band. He got inspiration to write music from Ricky Taylor.

Brandon started his career after joining Incubus band. The rock band was formed in 1991 and is from California. The band's first album named, Fungus Amongus released in 1995. Later on, in 1999 the band released next album Make Yourself that went double platinum. During the recording of Make Yourself, Boyd was in a major car crash.

On 6th July 2010, he released his first solo album, The Wild Trapeze. Moreover, in 2013 he joined a new band Sons of the Sea. The band released different songs and music videos including- Sons of the Sea, Steam to Rose, So the Echo and so on.

Besides this, he was also involved in writing books, articles, journals and artworks too. White Fluffy Clouds: Found Inspiration Moving Forward (2003, an art book) and From the Murks of the Sultry Abyss are some of his writings.

He then dated Baelyn Neff, an American actress since 2008. There are no rumors about them separating, so they may still be girlfriend and boyfriend.

The musician Boyd has an estimated net worth of $15 million. He owns a 4-Bedroom Craftsman in Santa Monica, California. The furniture and other materials in the house seem expensive. Boyd also is an owner of a  Mini Cooper. Well, he is living a lavish lifestyle.