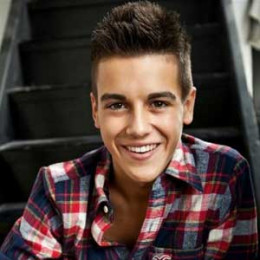 Brennan Clost is a Canadian actor known for playing contemporary dancer Daniel on the Family Channel hit series The Next Step. He was named Mr. Onstage New York and Mr. Showbiz. He also runs the YouTube channel Brit and Bren with Brittany Wynn.

Brennan Jared Clost now famous as Brennan Clost was born on October 20, 1994, in Burlington, Ontario, Canada to the parents, Robin Clost and Scott Clost. He belongs to white ethnicity.

He attended and graduated from Joanne Chapman's School of Dance, and then went to the world-renowned Juilliard School in New York City and graduated in Bachelor of fine art in May 2016.

Brennan began his career journey at a young age. In pursuit of his dream to be a professional dancer, Brennan was driven by his intense desire never to give up. Since then he started learning the diverse style of dancing including jazz, tap, ballet, hip-hop, contemporary, and acro. He now a highly competitive and versatile dancer

Brennan was Mr. Onstage New York in 2006, Mr. Showbiz in 2008, and a Silver Medalist at World Showdance Championships in Riesa, Germany in 2008. He rose to fame as a contemporary dancer on the show The Next Step along side Samantha Grecchi.

He performed in the Toronto Children's Festival, YTV's film King Of The Camp, at the Annual Mary Kay Cosmetics Gala, TSN Sports Celebrity Gala, on Canada's Got Talent, and Degrassi: The Next Generation.

Most recently, Brennan was a presenter at the International Emmy Awards in New York City on behalf of The Shaw Rocket Fund.

Clost is very secretive regarding his personal life. He has not disclosed anything regarding his dating life and affairs. However, in August 2016, Brennan came out as gay.

Till now he has not been linked to any guy. Brennan is possibly single.

Famous Brennan Clost is well established Canadian dancer who achieved a lot from his dancing career. Due to his work on the field, he was regarded as the most promising and versatile dancer of the current time.

Over the past few years through his dedication and hard work, Clost has considerably added millions to his account. The exact figure of Brennan's net worth is not revealed, but it is considered to be no less than in 6 digits.