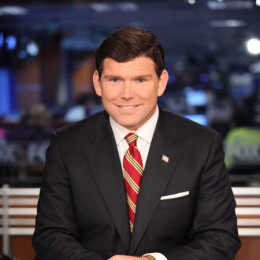 An American popular host who is widely known as the host of Fox News Channel's Special Report with Bret Baier. He is also former network's Chief at the White House Correspondent and also Pentagon correspondent where he covered administration of George W. Bush. He graduated from DePauw University in Greencastle. He started his career in broadcasting from local station in Rockford, Illinois. Later he joined WRAL-TV which is the CBS affiliated.

He is a married man. He and his wife has Roman Catholic faith and both of them attend the Holy Trinity Catholic Church. The couple looks perfect to each other. They are the parents of two sons. One of their son was victim of cardiac problem. The family was invited by former President George W. Bush to attend a party in White House. His son was then diagnosed by White House physician.

She is very gorgeous and pretty. Together they look awesome. Her picture along with him can be found in different sites. They are parents of two children.

He is the eldest son of the family. The couple has given birth to really beautiful child.

When he was child he suffered from cardiac problem. He is still undergoing treatment.