Brett Gardner, mainly known for his baseball career, was born in Holy Hills, South Carolina. He is a baseball outfielder and plays from New York Yankees who started playing baseball from his college days. Brett got attached to baseball since his high school days and was first involved in the College of Charleston baseball team and then got into College of Charleston Cougars. He was selected in the All-Southern Conference team.

Brett Gardner foles for a restraining order against an obsessed fan

The stalker calls herself his "future wife" and claimed he sent sexual "signals" to her from the field. Devasahayam and Gardner have never met in person, but she claims the two have been in a relationship since 2015.

On Monday, An attorney for Brett Gardner filed an order to protect against Gina Devasahaya, in Bronx civil court few days before. 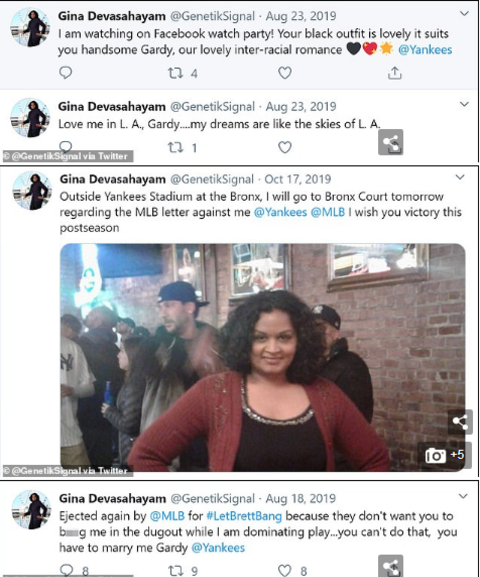 A news agency close to the athlete reported the Yankees are working to ban Debasahayam from all MLB stadiums in a way to keep her away from the all-star player and his family. In addition to that, the team allegedly instructed security guards at George M. Steinbrenner Field in Tampa Florida.

Gina, who claims she is the founder of an anti-aging biotechnology company accused Gardner, the MLB and Yankees star last year post she was kicked out of Yankee Stadium during a playoff game in October 2019.

Gardner is happily married to his long-term girlfriend turned wife, Jessica Clendenin. The duo walked down the aisle on 1 December 2007 at an intimate ceremony in the presence of their closed ones.

An American baseball outfielder proposed his sweetheart Jessica Clendenin amid spring training on a beach in Clearwater, Florida. Similarly, the intimate ceremony was held at the 1st Presbyterian Church on Peachtree.

Since the reception took place at the Piedmont Driving Club in Atlanta, he is spending sound life with her without any rumors of separation and extramarital affairs. They are united as life partners for over twelve years now.

The duo is proud parents of two sons; Hunter and Miller.  During his offseason, Gardner along with his family resides in Summerville, South Carolina.

How Much Is Brett Gardner's Net Worth?

Brett Gardner is one of the highest-paid baseball players. As of February 2020, Brett Gardner's estimated net worth is $25 million which earned from his 12 years long baseball career.

Some sources claim, he possesses a net worth of $40 million at present. The Richy rich athlete comes from classic family background.

His father, Jerry Gardner who played in the minor for the Phillies owns a 2,600-acre farm in Holly Hill. In 2005, he signed a contract with the New York Yankees and received a $210,000 signing bonus.

Gardner is best known as one of the fastest players in the Major League and one of the most disciplined players. He is the third-best player in the American League.

He extends his contract with the Yankees for 4-years in 2014, the contract worth is  $52 million. In 2011, Gardner purchased a property in Summerville, South Carolina which cost $1.1 million.

Walking into a lifestyle, Brett is fond of luxury cars and has a collection of vehicles like Range Rover, Mercedez, Nissan, and others.

He played several minor leagues through 2008 and had a .291 batting average and a .389 OBP. He made a debut in Major League Baseball from New York Yankees in 2008 and is still playing for New York Yankees.

Gardner was named the Yankees' starting center fielder for the 2009 season. In 2014, Gardner extended his contract with Yankees for four years. In 2015 he was one of the five candidates chosen for the All-Star Final Vote for the 2015 MLB All-Star Game but later he was removed after being chosen to replace the injured Alex Gordon on the All-Star team.

Gardner succeeds to win the Gold Glove Award for American League left fielders in 2016. In 2017, he was listed as a Gold Glove finalist but ultimately he lost to Alex Gordon of the Kansas City Royals.

Some of the renowned New York Yankees stars Brett has worked with are Michael Pineda, Michael Kay, and Joe Girardi.

Brett Michael Gardner was born on August 24, 1983, in Holly Hill, South Carolina to Jerry Gardner and Faye Gardner. His father, Jerry played in the minors for the Phillies.

Gardner was raised along with his older brother, Glen on the farm of Holly Hill. He is an American and belongs to the white ethnicity.

In 2001, he attends the walk-on tryouts for the baseball team at the College of Charleston and became the three-year starter for the college.

Brett and Jessica were married at 1st Presbyterian Church on Peachtree. Their reception was held at Piedmont Driving Club in Atlanta. They have two children together.

Hunter is the first son of Brett who looks cute, has an adorable smile, and resembles to his father.

Miller was seen with his parents in CCandy children's clothing launch. He has a cute and adorable look. There is not much information about him.