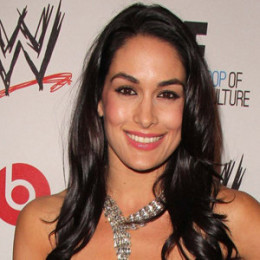 She is an American wrestler who is better known as former World Wrestling Entertainment Divas Champion. She is daughter to Jon Garcia and Kathy Colace. She is better known as one-half of The Bella Sisters, who are a team of twin sister wrestlers and models. She is of half-Mexican, half-Italian descent. She has also starred on reality TV series Total Divas. Before joining WWE she was trained and use to perform with the Florida Championship Wrestling association alongside her sister. Pro Wrestling Illustrated listed her in 21th position among best female singles wrestler in 2011.

Talking about her personal life she is already tied in knot with her longtime boyfriend. Though it's hard to imagine her with anyone else beside her husband but prior of being married to him she was in relationship with the former guitarist for Poison. They were hot items for 5 years and after that they moved in different directions. She has not been biological mother yet.

They started dating each other back in 2010. After that they got engaged in 2013. They are leading very happy married life.