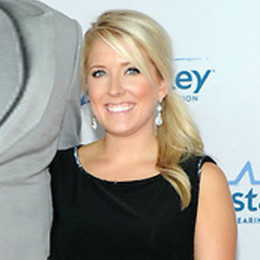 Brittany Claflin is mainly known for being the wife of the basketball player Cole Aldrich. The couple got married on July 20, 2013, and they have been living a happily married life for four years now.

Brittany Claflin is better known of Cole Aldrich wife. She grew up in the United States and she belongs to white ethnicity and holds an American nationality.

The 28-years-old Brittany studied high school at her birthplace, and she got her degree from the University of Kansas.

Brittany Claflin is not as famous as her husband, Cole Aldrich. Besides that, she is known for doing social works. She has also done charity along with her husband.

Talking about the beautiful Claflin's personal life, she married her college boyfriend. She dated boyfriend Cole Aldrich for more than five years and on July 20, 2013, the couple decided to tie the knot at the St. Paul Hotel. Now, they have been married for four years and yet they don't have any children together.

An American professional basketball player, Aldrich had a keen interest in baskeball since his high school. He continued his basketball in his college career.

After freshman season, Aldrich became the premier big-man going into his sophomore season. On Monday, April 13, 2009, Cole announced that he would go back to KU for his Junior season.

Aldrich’s won the 2009-10 men’s college basketball Academic All-American of the year as designated by CoSIDA and presented by ESPN the Magazine. He ended his college career with a perfect 55-0 at Allen Fieldhouse.

Cole then joined Oklahoma City Thunder on March 29, 2010, and he signed a 2-year contract with the Thunder from 2010 to 2012. In October 2012, Cole, Daequan Cook, Lazar Hayward, and James Harden were traded to the Houston Rockets for Jeremy Lamb, Kevin Martin, and draft picks.

On February 20, 2013, Cole was traded to the Sacramento Kings alongside Patrick Patterson and Toney Douglas. On September 24, 2013, Cole signed with the New York Knicks and scored a career-high 19 points in an 80-79 win over the Orlando Magic on 11th of April 2014.

On July 13, 2015, Cole signed with the Los Angeles Clippers where he had a season-best game with seven rebounds and 19 points in a 104-90 win over the Miami Heat.

Aldrich signed a 3-year contract at $22 million deal with the Minnesota Timberwolves on July 13, 2016.

The beautiful and charming Brittany Claflin married her longtime boyfriend Cole Aldrich on July 20, 2013, at the St. Paul Hotel. The lovable couple is living happily married life together.