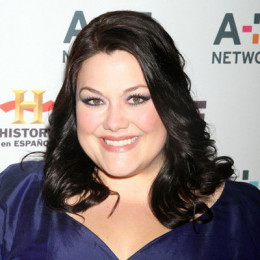 She is an American actress and singer who has appeared in several of the musical theatre. She is known best for her performance in What Women Want. She is best recognized as plus size celebrity about which she does not bother. She was born to a city manager father, Robert and mother, Kathleen Elliott. She has two siblings. She had attended Gabriel Richard Catholic High School and graduated from Western Michigan University with Bachelor of Fine Arts in Musical Theatre Performance.

She is not married till date. There is no any information available on her past or present dating or boyfriends. Some sites suggests she is still looking for her love. There are rumors that she has been secretly married but it has been confirmed by her. She has remained very discreet and low profile related to her personal life. She has a plus size stature which she says she cherishes it and has been the idol to many plus size women in America.