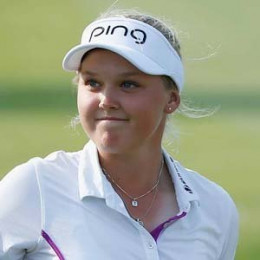 Brooke Henderson is a Professional Canadian golfer who finished tied for 10th at the 2014 US Women's Open at the age of 16. She won numerous amateur tournaments and was the top-ranked woman amateur golfer in the world before turning professional in December 2014.

Brooke Henderson isn't dating boyfriend nor she ever spotted with anyone. It seems like, she is more focused on her career than finding a soul mate for her.

Henderson is active on Instagram with 84.1k+ followers where she shares her personal and professional updates to her fans and admirers.

Brooke Henderson holds a net worth of $4 million from her golf career.

Brooke Henderson was born on 10 September 1997 in Smiths Falls, Ontario, Canada. Both of her parents were experienced golf players which inspires her to pursue her career in golf.

Henderson was a member of the Canadian Olympic Team for the 2016 Summer Olympics in Rio de Janeiro, participating in the women's Olympic golf tournament. She ultimately placed seventh.