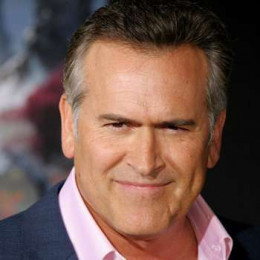 Bruce Lorne Campbell is an actor, voice artist, author, writer, director and producer. He is known for playing the role of Ash Williams in Sam Raimi's hit Evil Dead franchise. Some of his notable film credit includes Darkman, The X-Files, Charmed, Raimi's Spider-Man trilogy, Cloudy with a Chance of Meatballs and Cars 2. He was born to Joanne Louise, a homemaker and Charles Newton Campbell, an actor and is of Scottish descent.

Accounting his personal life, till now he has been married twice. He was married to his first wife for almost 6 years and filed for divorce. He has raised two children; a daughter and son with his first wife. Since Feb 1991, he has been enjoying his second marriage with his wife who by profession is a costume designer. The two currently resides in Jacksonville, Oregon.

She is the first wife of Bruce, whom he married in the year 1983. They have raised two children from their 6 years of marriage.

She is the second wife of Bruce, whom he married in the year 1991. She is a costume designer by profession.

She is the only daughter born to Bruce. Information on his daughter has not been made public.

He is the only son born to Bruce, whose current status is not known to the media.