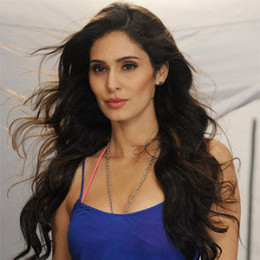 Brazilian actress working in Bollywood, Bruna Abdullah is the daughter of Lebanese descent father and Italian-Portuguese mother. She has appeared in several advertising commercials for IndusInd Bank Reebok, Fiama di Wills. Bruna has participated in the reality TV Show entitled 'Dancing Queen' and also in reality TV Show 'Khatron Ke Khiladi'. She was eliminated from Fear Factor on 9th September 2009.

Bruna Abdullah appeared as an item girl in the movie 'Desi Boyz' released in 2011. She was also starred in one of 2012's most awaited Tamil movie 'Billa II', for which she won the Kalakar Awards for the Best International Youth Icon Award. Bruna was in a relationship with Omar Farooque, whom she partnered as one of the Jodi in reality, show 'Nach Baliye 6.' According to the source,  Bruna is currently dating a Scotish guy named Al.